About The Odessa Record

The earliest years of its existence, The Odessa Record changed hands several times. Originally established by an itinerant printer, Mike Devlin, the paper was soon bought by R.S. Crowl, who sometimes partnered with L.C. Weik. At other times, the two men owned the paper separately. The early publishers operated their own presses and set their own type, but by the 1970s the new offset printing process involved machines that were far too costly for a small-town newspaper. Under publisher Walt Larson, The Odessa Record began contracting with the Columbia Basin Herald in Moses Lake and later with the Grant County Journal in Ephrata to have the printing done on their premises. Today, now a division of Free Press Publishing, the print edition is produced at the Cheney Free Press on a Goss rotary offset printing press.

The editorial office of The Odessa Record has also changed its location from time to time, from its original home in a small wood-frame building in the 200 block of First Avenue to the former bank building where it once again resides. Under publisher Crowl, The Record moved to a location further west on First Avenue, where it remained for 56 years. After that it resided on north Division Street for a few years before returning to its former home in the one-time bank building at 1 West First Avenue. The bank’s safe is now used as a newspaper storage archive. 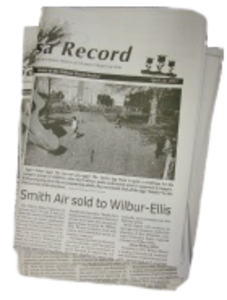