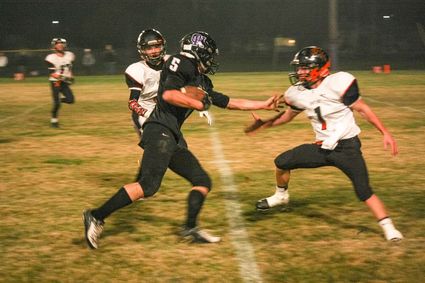 Odessa brothers Sage and Gaven Elder continued to provide muscle as the Titans marched forward into the 8-man football playoffs. Sage (5) picks up good yardage before being stopped in Friday's game against Entiat played at home in Odessa.

Last Friday in another home game in Odessa, the Titans played Entiat, winning 72-16. Titan quarterback Colton Hunt was still sidelined with a sprained ankle. Freshman backup QB Camden Weber stepped up and led the Titans to another lopsided victory.

Gaven Elder paced the Titan offense in this game from the very beginning, picking off an Entiat pass on their first offensive play of the game.

The Titans then scored first as G. Elder ran 30 yards for the touchdown and then also ran the ball across the goal line for two more points. Entiat answered with a TD and two-point conversion to tie the s...