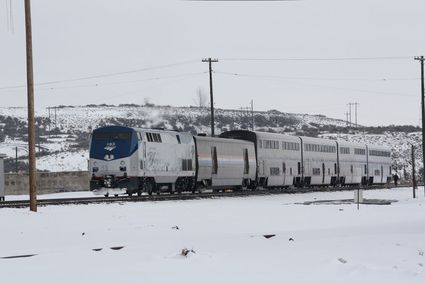 The Amtrak passenger train was forced to sit on the tracks in Odessa from very early morning until about mid-afternoon on Sunday.

The Amtrak passenger train that normally flies through Odessa in the middle of the night was forced to sit on the tracks in our fair town from very early Sunday morning (around 5 a.m. according to some Odessa early birds) until about mid-afternoon. Several unfamiliar faces were seen at the local grocery store, and enquiries to the cashier about them were answered with reports that a freight train elsewhere on the track had broken down and was being repaired. The Record's efforts to confirm the information with Amtrak were unsuccessful.

We did learn, however, that at least two other Amrak t...