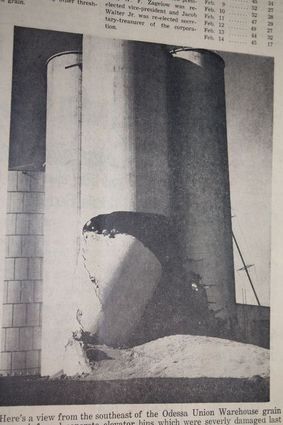 Reiman elevator near Odessa exploded in 1967.

Catholics build house and hall. The members of the Odessa St. Joseph's Catholic Church have announced a change in the building program they had outlined for this spring and arrangements are now completed for the enlargement of the plans, which originally only called for a home for Father Phillip so they now include also a parish hall, both of which will be under one roof, the hall to occupy the basement floor. The estimated cost of the newly proposed structure is $3,000 and work will begin on same as soon as it...