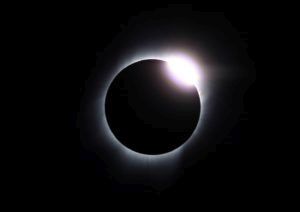 The "diamond ring effect" appears twice during an eclipse, just before and just after totality (complete blocking of the sun's light). The unevenness of the lunar surface allows the light to peak through a deep valley on the moon and produce this effect. The phenomenon lasts only a very short time, but many photographers were able to catch the scene and post their photos online. This image is from the site of the Lowell Observatory in Flagstaff, Ariz.

The total eclipse of the sun that took place Monday of this week was thrilling for most Americans to see. Although the very best viewing (a total eclipse, with 100 percent coverage) was in northern Oregon, the sun achieved between 91 (Spokane) and 97 (Walla Walla) percent coverage in eastern Washington during the eclipse. The previous total eclipse visible from the United States was 38 years ago on February 26, 1979.

Hordes of people descended upon the towns of Prineville and Madras, Ore. for the opportunity to see a total eclipse, where the sun goes completely dark except for a ring of li...