Tigers place fourth at 1B tournament in Spokane 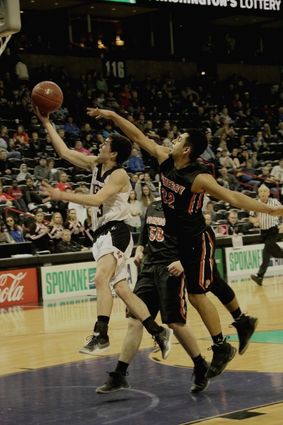 Camden Weber takes a shot in the playoff game against Pomeroy Thursday, March 1.

The Odessa Tiger boys basketball team placed fourth in the 1B state tournament played at the Spokane Arena last week.

The Tigers faced off against Pomeroy in the first round of games at the Spokane Arena Thursday, February 28. The boys never seemed to get into the rhythm of the game, even though the final score makes the game look more lopsided than it really was. The Tigers came close to tying the score at one point, but were unable to keep up the pace. Foul trouble also plagued them by the end of the game.

Ryan Moffet led the scoring but was held to 20 points. Colton Hunt had eight points and Camden Weber seven.

Weber and Marcus King led the rebounding with six each.

After the loss to Pomeroy, the Tiger boys moved into the losers' bracket Friday, facing Muckleshoot Tribal, which had lost to Almira-Coulee-Hartline on Thursday. Odessa played well and handed the Muckleshoot team a 10-point loss.

Moffet again led the scoring with 24, but had plenty of support from teammates whose shots were also finding the basket. King scored 15 points, Hunt 12 and Weber and Tim DeWulf 10 points each.

Rebounding was led by DeWulf with 10, followed closely by King with nine and Weber with eight. King also had seven steals and seven assists in this game.

On Saturday, the Tigers played at 8 a.m. for the fourth and sixth-place slots against Tacoma Baptist, taking fourth place handily, 57-41.

Moffet scored 23 to pace the Tigers, and King put in nine more.

DeWulf pulled down eight rebounds and Moffet had another seven.

The team from Sunnyside Christian took the state championship again this year, defeating second-place ACH in Saturday's final game by a score of 69-61. The game ended with double overtime periods before Sunnyside pulled away for the win. 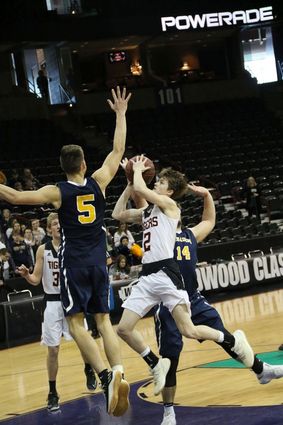 Ryan Moffet takes a chance and goes in for a lay-up in the play-off game against Tacoma Baptist Saturday, March 3.