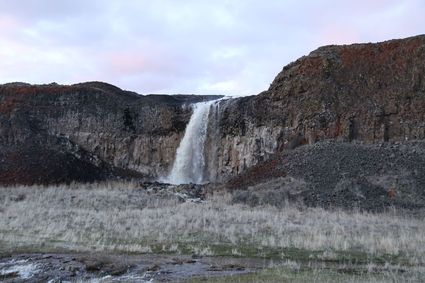 Delzer Falls was the subject of many nature photographers last weekend, or so The Record was informed. The water had been absent for a few years, but wetter weather has restored the flow for now.

Spring runoff is in evidence with the awakening of Delzer Falls just a few miles northwest of Odessa between Pacific Lake and Bob’s Lakes, which also remained filled with water. Despite the cool and windy weather last weekend, several intrepid local photographers were out in the countryside recording the beginnings of new spring growth of both flora and fauna.

Calls and messages to The Record told us that photos of Delzer Falls were available, and so they were. We also heard from our reporter in Harrington that a light snowfall was experienced in that fair town as the weekend came to a cl...