Growing up Goodman: Never take for granted the ones you're closest to 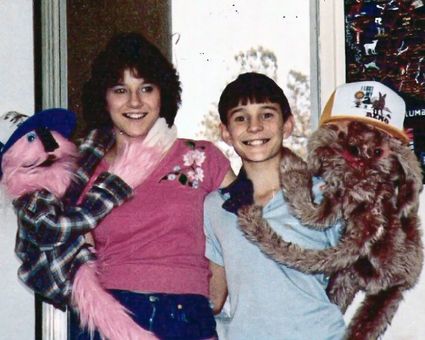 Linda Goodman and her brother Randy Goodman sport the very same smiles in this family photo from days gone by.

Have you ever missed someone but never really come to the realization of it until you met up with or spoke with that person again?

Usually it's someone we take for granted and assume they will always be there just because they simply always have been. It's almost always a family member.

You know the old story. You get older, move away, start a life, school, career, marriage, kids. Meanwhile, the other person, be it a sibling, cousin, aunt or uncle, has done the same thing, moved on with life.

Well, this phenomenon has recently happened to me. In my case, it happened to be my brother who sent me a message on Mother's Day.

Randal Wayne entered my life in March of 1972 when I was 3.5 years old. One of my earliest memories of him is the first time I was allowed to hold and feed him all by myself. I was in a pair of flannel pajamas and he was peacefully taking his bottle. My mom told me to get dressed and I could finish feeding him once I had done so. I was so upset when I went back to feed him, all dressed for the day, he wouldn't take his bottle. All he would do was cry, and I remember thinking, maybe he didn't like me very much.

Growing up, Randy and I were pretty close. According to our mom, I even potty trained him. When we fought, we fought, although now when I compare them to some other sibling arguments I have heard about, ours were pretty mild. We never used weapons or really even hit each other, although I do remember a time or two, three, four when he kicked me in the shins. I think the last time he did that was during my sophomore or junior year of high school. I was 15 or 16 and he was 12 or 13. I never kicked or hit him back. He's my baby brother. I couldn't hurt him.

I went through a phase (I'm sure we all did) when I wanted to hang out with my friends. I thought he was just too young and it definitely wasn't cool to have my little brother tagging along. When I complained about it, my mom usually looked at me and said something like, "Too bad, like it or lump it, you're taking your brother with you."

It was at those times that he became especially annoying and since he was the person I was closest to, he knew exactly how to push my buttons. I think he may have written the manual on "How and what buttons to push to irritate your older sister."

Looking back now I am not sure what the big deal was. I know that when I had no friends around to occupy my time, my brother never told me I couldn't come along with him. He always seemed happy to have my company.

Our lives hit a giant bump in my freshman year in high school when our parents split and not knowing what to do my mom decided to move back to Washington from Arizona. More specifically, we were moving from Tucson to Ephrata, Washington. Dad was staying in Tucson.

I watched my brother struggle to adjust to all this change in our lives, to not having dad around, to a totally different way of life living in a small town. It wasn't going well. After about two years he moved back to live with dad in Tucson. I was 16 years old.

I didn't see Randy for about three years and when I did, long gone was the clean-cut kid in polos and muscle shirts. In front of me now stood a very tall, angry teenager, with long hair, wearing an Iron Maiden T-shirt, high tops and a flannel. I know I didn't recognize him right away and I believe our dad actually had to point him out to me, but we picked up right where we left off, as if we'd never been apart. We argued, but he was my best friend again, only this time instead of potty training, now I was helping teach him to drive.

Then life happened again and after a few years we both ended up married, having kids and once again living in different states.

I have only seen my brother face-to-face one time since February 2010 and it was only for a few hours as he was getting my mom loaded up to move back to Tucson. Time had drawn lines on his face and moved his hairline back quite a bit, but this time I recognized him. He looks just like our dad. 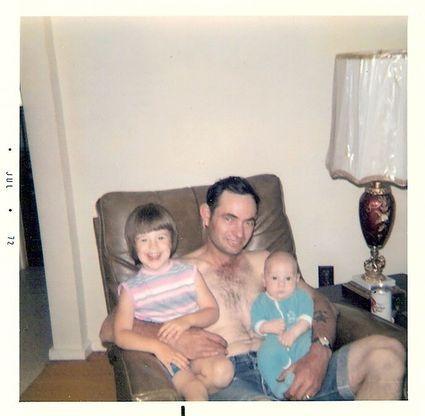 Linda Gail Goodman and Randal Wayne Goodman at home with their father in 1972.

Recently Randy had a mini vacation in the hospital for a few days after being taken there by ambulance. Thankfully, he is doing well, and if he follows the rules, he will be with us for some time. The time I spent waiting to find out if he'd be OK, made me into a barely contained basket case (which is evidenced by last week's Calendar of Events column) and really made me realize even more so just how much I've missed my brother.

We talk a lot more often now and when we can't, we send each other messages to let the other know we are thinking of them. He is still my best friend and I know I can tell him anything. I also know I intend to stick with my promise of staying in closer touch with him and not taking for granted that he or anyone I love will always be there, because the way time flies, one day they may not be.