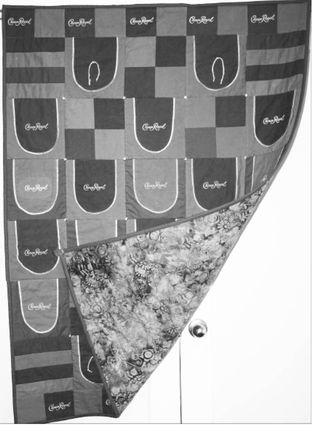 The Crown Royal quilt made by Joyce McClanahan, auctioned Sept. 16 with proceeds going to The Odessa Food Bank

The 48th annual Deutschesfest has arrived, and Odessa has rolled out the welcome mat to the many friends, family members, former residents, long-time repeat visitors and first-timers to the town's celebration of its founding by many German-speaking immigrants at the turn of the 20th Century.

Many of the usual events of long standing are back again this year. The most up-to-date schedule of events is given below. One of the highlights this year is a full three days of free entertainment on the outdoor stage. Dyanne Deering, an Odessa High graduate who currently lives in Moses Lake and now commutes to work at The Odessa Record, and local resident Sandy Smith have worked hard to provide a showcase of local and regional talent. From the Spring Chicks senior dance group to the vocal talents of Odessa High School students, the outdoor stage will be hopping with activity on Friday, Saturday and Sunday.

The only major disappointment on this year's schedule of activities is the absence of the Kid Zone. At press time, The Record had not found out the reasons for the missing Kid Zone. It had been a very successful event, and kids appeared to have a very good time with the features provided the past couple of years. It is hoped that work on re-establishment of a Youth Garden during the Fest will be a priority for next year's Fest.

In a last-minute addition to the schedule, Chiefs Bar & Grill will hold a raffle drawing for a small quilt made of the cloth bags that surround Crown Royal products. The dark-purple bags for whiskey and bright green bags for apple liqueur were collected by local resident Chuck Van Hevel, sewn into a lovely quilt by Odessa Quilt Club member Joyce McClanahan and will be raffled off in a drawing held at Chiefs on this coming Sunday at 11 a.m. The proceeds from this raffle will go to support the Odessa Food Bank. Tickets are $2 each or three for $5 and are available at Chiefs.

A new experiment this year will allow kids to join their families in the Biergarten during the daytime hours. Kids aged 12 and under must be accompanied by an adult at all times inside the Biergarten. Minors can be inside from the Biergarten's opening at 11 a.m. until 4:30 p.m. on both Friday and Saturday and from 11 a.m. until 2 p.m. on Sunday. These time periods will be considered family time, and other patrons are advised to be on their best behavior in the presence of young innocents.

Also new this year are self-guided walking tours of one of Odessa's first neighborhoods and of an immigrant's arrival by train in a new rural town, compiled by new Odessa resident Kathy Ashe. There is no cost for the pamphlets that describe these walking tours, but the sponsoring organization, the Old Town Hall Rejuvenation Society, will gladly accept donations to its fund for renovation of the Old Town Hall. Send donations to OTHRS, c/o Faye King, 16790 King Ranch Rd., Odessa WA 99159.