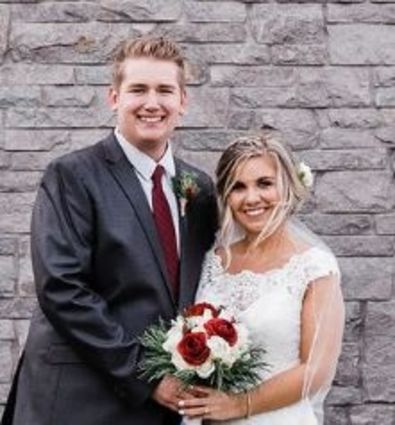 Alyssa Ryder and Kolby Crossley were married December 8, 2018 at Falls Event Center in McMinnville, Oregon. Tim Coley, a dear friend of the bride and groom, officiated the ceremony.

The bride is the daughter of Byron and Robin Ryder of Ridgefield, Wash. The groom is the son of Bill and Christine Crossley of Odessa. The bride's sister, Chenae Horne, served as maid of honor, while Easton Crossley served as best man for his brother. Bridal attendants included friends of the bride, Taylor Casey, Marisa Jingco and Alyssa Knutson, as well as sister to the groom, Kassidy Crossley. Friends of the groom, Justin Hauge, Spencer Nee and Andrew Schafer, along with brother of the bride, Camden Ryder, served as groomsmen.

Following the ceremony a reception was held at the same location, where friends and family enjoyed dinner, drinks and dancing.

The bride and groom are both graduates of Washington State University, Alyssa with a degree in teaching and Kolby with a degree in journalism. They reside in Colorado Springs, where Kolby works for KRDO, an ABC news station, and Alyssa is a substitute teacher.