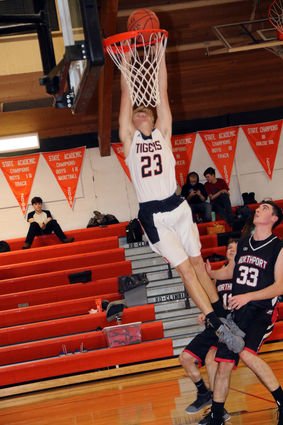 A stunned Mustang watches as Tim DeWulf (23) hangs from the rim.

The Tigers annihilated the Mustangs, 103 to 20.

Ryan Moffet was once again the point leader for the Tigers, scoring 34 points in the game. He was followed by Camden Weber and Tim DeWulf with 14 points each, Marcus King with 11 points, Daeton Deife 9, Jaden Hunt 5, Jett Nelson and Drew Hardung each with 4 points and Pilot Weishaar and Eric Johnston with 3 each.

These boys were killing the opposition at the free-throw line. Ryan Moffet, Eric Johnston, Tim DeWulf, Marcus King and Jaden Hunt all hit 100 percent of their attempts. 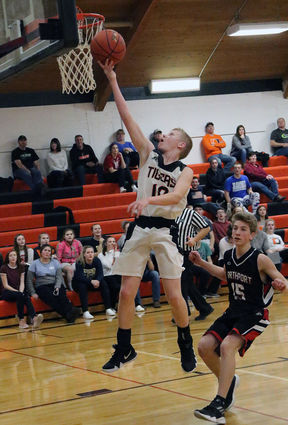 Daeton Deife (10) makes a perfect reverse layup in Friday's game. Right: The score board says it all for the boys basketball game against the Northport Mustangs.

A total of 31 rebounds helped to keep the ball going in Odessa's direction. The Tigers only had six turnovers on the game. It is easy to see why it was such a high score on the part of the Tigers.

As the Tigers closed in on a three-digit score near the end of the fourth quarter, Johnston was the lucky Tiger whose basket rolled the score over to the 100-point mark.

On Saturday, January 5, the Tigers squished the Hornets by a score of 87 to 39.

Once more, Ryan Moffet was the high scorer in the game with a total of 46 points. Tim DeWulf had 14 points, Camden Weber 7, Lane Lobe 6, Jaden Hunt 4, Jett Nelson 3 and Marcus King 2.

The Tigers had a total of 37 rebounds on the game, 28 assists and 19 steals. The boys know how to keep a tight grip on the ball so they can achieve these high scores.

The next home game is this Saturday, January 12, against Curlew, followed by another home non-league game on Tuesday, January 15, against Oaksdale.