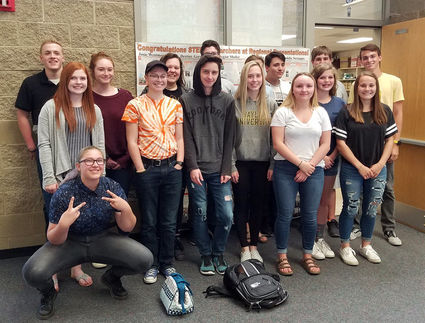 Science students from Odessa, Wilbur/Creston and Asotin High Schools hosted a finale of the STEM Gems Grant cycle in which Odessa was awarded $5,000. Students presented their independent research and enjoyed a catered lunch.

On Wednesday, May 8, 2019, 16 students from four school districts traveled to Odessa High School to close out the 2019 STEM Gems Grant cycle with a presentation finale. Mic Kohlstedt from The Rural Alliance in Spokane is the director of the STEM Gems Grant where the Odessa Science Department was awarded over $5000 to defray the cost of equipment, travel or any expense related to science research and the promotion of rural students conducting independent STEM activities.

The students arrived at 9 a.m., followed by a brief welcoing speech from Odessa science instructor Jeff Wehr. Each student's research project was then presented using a poster board or visual aids. Everyone then was treated to a wonderful lunch provided by The Rural Alliance STEM Gems Grant, catered by the Odessa Golf Course. The students engaged in a mini on-the-spot research quest, compiled their data and concluded that a cell phone wall charger can "stick" to a wall due to heat friction, however, and not some sort of static or electrical charge. After the remaining students presented their research, a group picture was taken and Kohlstedt and The Rural Alliance were recognized for their continued support.