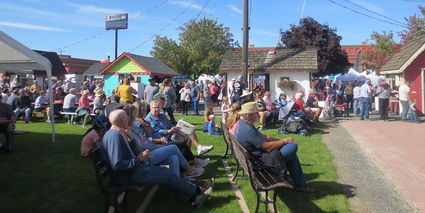 The area around the outdoor stage appeared to be the place folks wanted to be. It was a beehive of activity, with plenty of food and shopping nearby and free music on the outdoor stage. The special contests provided by the organizers also offered a change of pace for the audience from time to time.

[The Record's reporters were out and about gathering information on Fest for our readers. More will follow next week, as reports come in from vendors, civic groups and non-profits.]

The 49th annual Odessa Deutschesfest may not have had the biggest crowds in the history of the event, but it just may have been one of the longest Fests. The town was a hive of activity beginning early Thursday morning, as vendors began arriving, searching out their favorite locations and setting up shop and lasting well into Sunday, as many folks stocked up on food on the way out of town.

Despite efforts by the Chamber of Commerce to lure visitors to businesses located at the west end of town, most vendors ended up on Division Street, although several new vendors did put their booths on First Avenue.

There was supposed to be no parking all along First Avenue in the downtown business district this year, but since so few vendors actually set up there, cars began parking on the street anyway. Some businesses favored the parking ban because it seemed to make downtown more pedestrian friendly and opened up visibility to the storefronts to those driving through town. Other business owners objected to the lack of parking.

The chalk-drawing contest kicked off the Thursday evening activities in front of Wheatland Bank, its sponsor. A total of 70 children in four age groups participated. First place winners were:

The trike races were held once police and firefighters had closed First Avenue to all traffic between Alder Street (SR 21) and First Street. Four age groups competed, one after the other. Whoever crossed the finish line first won a gift certificate, and all participants received treats from the race sponsors.

First-place finishers in each age group were:

Super Heroes was the theme of this year's bed races held Thursday evening of Fest.

Race times were recorded, and the final heat pitted the two fastest teams against one another, the OHS juniors versus the team from Leffel, Otis & Warwick. At the end of the race, however, the judges ruled that the LOW Heroes had not completed all of the steps required during the mid-race rituals in the final heat and were therefore disqualified. That ruling moved the sophomores into the second place position. So next year, the sophomores will organize the bed races, and the juniors bear the title of bed race winners.

The 5K/10K Fun Run is sponsored by the student body of the Odessa School District under the supervision of its principal Jamie Nelson. A total of 21 people entered to either run or walk in the Fun Run.

The Best Kuchen contest had only three contestants this year, all local residents: Terry Connolly with an apple kuchen, Peggy DeWulf with a nectarine kuchen and Odessa newcomer Dawn Nelson with peach kuchen.

Judges Laura Estes, Lindsy Starkel, Sheena Starkel and guest judges Jeannie Bercier and Debbie Bassen, both of Spokane, tasted a slice of each kuchen followed by a drink of water before the next bite.

Third place went to Dawn Nelson, second to Terry Connolly and first to Peggy DeWulf. Each took home a plaque made by Odessa Designs.

The Best Pickle contest had five entries, with two coming from as far away as Wenatchee and Moses Lake. Participants were:

Denice Wraspir of Ephrata and Odessa with dill

HaLee Walter of Odessa with dill

Jennifer Lewis of Odessa with dill

The judges were Odessa mayor Bill Crossley, Lindsy Starkel, Sheena Starkel and guest judges Jeannie Bercier and Debbie Bassen, both of Spokane. After all the pickles were sampled, the judges the decision was as follows:

For this contest the audience acted as judge and jury. After the first round of applause, Mike Zimmerman and Stephen Walter were eliminated. Ken Nash and Michael Igo followed after the second round, and Luke Hall, Andrew Huntington and Steve were eliminated after the third round, leaving Jeremy Norris and John Anderson as the two finalists.

In the final round of voting, vigorous applause and cheering came from the audience, and for a moment it looked as though Norris might be the winner. In a last-ditch effort, however, the fans of John Anderson were able to make just a bit more noise to win him the first-place prize, a $67 gift certificate to Always Beardiful. For taking second place, Norris took home a Norelco trimmer.

The Kutest K-9 contest was a big hit, boasting a whopping 22 entries, including two coming from as far away as Olympia and Spokane. The contest was broken down into four categories based on the size of the dog, i.e., small, medium or large and then the overall grand champion. Odessa deputy marshal Les Jimerson and co-organizer of the outdoor stage Dyanne Deering were the judges.

In the small category, there was a two-way tie. Mochi, an almost nine-month-old Shorkie (Shih Tzu-Yorkie mix), is a very sweet pup. Add the fact that she was dressed up in a dirndl, and little Mochi was simply too adorable for words, looking very much like a stuffed animal toy. Mochi is owned by Kerry Scheller.

Then there was the equally adorable Maggie Mae, an 11-month-old Yorkie poo (Yorkie-toy poodle mix), who also looked exactly like a stuffed animal covered in chocolate brown fur with curls slightly larger than those of a toy poodle, making her look so soft and cuddly. Maggie Mae is owned by Nancy Coogan.

Since the first round of voting by the judges ended up in a tie, the final decision on a winner was made by audience applause. Although it was very close, little Mochi the Shorkie was the winner.

Among the medium-sized K-9s, a three-way tie developed between Ace, a beautiful four-month-old Australian labradoodle owned by Aubrey Iverson; Flash, a five-month-old basset hound owned by David Glenn that owed his cuteness to his short little legs and the longest ears, so long in fact that it looked as though he might trip over them with every step; and Rosie, a nine-week-old chocolate lab with a great personality and a well-behaved disposition. She had fur that was a slightly different shade than that of most chocolate labs. Her coat was so shiny that its depth of color was unreal.

Once again, the three-way tie was broken by resorting to audience applause, and Rosie was the winner for medium-sized kutest K-9.

The large dog category turned out to be a four-way tie. No joke. We couldn't make this stuff up if we tried.

After the crowd voted through its applause, the final two K-9s Kramer the golden retriever and Zeus the Great Pyrenees mix. The last round of applause chose Kramer in the large dog category.

The Grand Champion award in the Kutest K-9 contest went to Kramer, the golden retriever. After the contest, Kramer's owner made a donation toward acquisition of another K-9 officer for the Odessa Town Marshal's office.

Much to the surprise of many, a K-9 officer demonstration immediately followed the Kutest K-9 contest. Two officers, Deputy Stewart of the Moses Lake Police Department with his K-9 officer Chief and Deputy Phillips of the Adams County Sheriff's Department with his dog Garrett took to the stage to put their dogs through their paces.

Phillips explained that the dogs come from all over the world and that the officers who are to become their handlers get to hand-pick the dog they will be working with. The commands the officer gives the dog are usually in the language of the country the dog came from. "For example," Phillips said, "my dog Garrett is from Germany, so his commands are in German." Both the K-9 officer and human officer go through weeks of rigorous schooling before they can work together on the streets.

Phillips displayed a couple of protective sleeves, one of which Stewart wore on his arm for protection during the demonstration. Phillips then held up a K-9 Kevlar (bulletproof) vest, showing the crowd how it attaches and adjusts to fit the dog. The cost of a K-9 vest is approximately $3,000. Often, however, the company that makes them will donate the vest if it is worn in memory of a fallen officer, for example. Phillips explained that Kevlar vests aren't the only way in which the dogs are protected. Another way is by having them wear a muzzle. Not only does the muzzle help protect the public from being bitten in case something were to go wrong, it also allows people to meet the dogs and pet them in situations such as a demonstration.

The officers fielded audience questions such as, "Can any type of dog be a K-9 dog?" With Phillips answering that K-9 officers are trained for two things, either search and rescue operations or drug interdiction. Sometimes they are dual purpose dogs like Garrett, for example. He is trained for search and rescue and also to sniff out narcotics, methamphetamine, cocaine, ecstasy and marijuana.

Can girl dogs be K-9 dogs? Answer: Yes, although they aren't very common. Most are male dogs, but there are some female K-9 officers.

Can any dog be a K-9 officer? Answer: Most dogs can be trained for search and rescue, but the majority of drug dogs are either German shepherds or Belgian Malinois. The reason is that those dogs have approximately 225 million smell receptors in their noses. If a human were to smell a pizza, he/she could probably smell and pick out individually the pepperoni, sausage, dough and herbs, all separately. But if the shepherd were to smell the same pizza, he could pick out every single ingredient used to make it.

Stewart puts on his protective sleeve as Phillips explains that he will set Garrett onto Stewart, letting go only when commanded to do so. Garret is across the stage in a flash and latched onto the Stewart's sleeve. He lets go when commanded and not a second before. After a few repeats, Phillips explains that Stewart is going to make peace (so to speak) with Garrett and be able to pet him on the head with the sleeve he had just attacked.

Next the officers simulated the pat down of a perpetrator during which the Stewart would suddenly push Phillips and Garrett would react to protect Phillips without waiting for a command. He then said, "Now Garrett and I have been doing this so long that Garrett likes to cheat. I'm going to pat down Deputy Stewart twice and walk back to Garret after each time. Then on the third pat down is when Deputy Stewart will push me. Now watch Garrett, because on the second pat down he will try to go. We've been doing it that long together, so long he remembers. He is that smart."

Phillips pats down Stewart, left side, then right side, and walks back to Garrett who is visibly keyed up. He then walks back to Phillips, pats down his left side and as soon as he starts on the right side Garrett starts across the stage, only to be reprimanded by Phillips who explains that now they have to start over, because training a dog requires constant repetition. 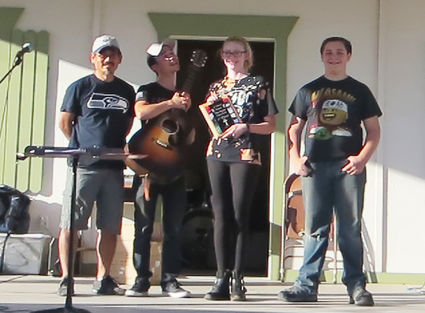 After the demonstration, several people went to chat with the officers and pet the dogs.

This year there was a total of six acts and seven participants for the Tim Hauge Memorial Talent Show, and all of them showcased their vocal chords in song.

Judging by the applause, the favorite at the talent show was Ella Caler, who received a plaque for her efforts.