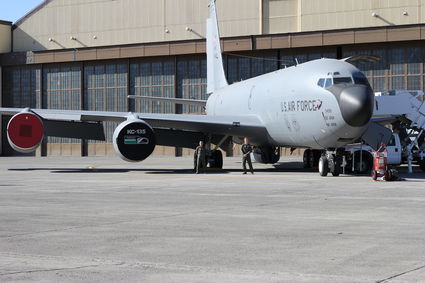 FAIRCHILD AIR FORCE BASE – On Aug. 31, 1956, the KC-135 stratotanker took its first flight off base. Over 60 years later, the refueling tanker continues to be the model used by the base for refueling missions and deployments. The base celebrated the “birthday” of the KC-135’s first Fairchild flight Monday.

That KC-135 flight occurred two years after the Air Force purchased the first 29 of an eventual 732 plane fleet. The prototype was the Dash 80, designed in 1954 at the beginning of the Cold War, the same year the Air Force made the purchase, according to a presentation given to media by Chief of Readiness Major Nicholaus Herr of the 92nd Refueling Squadron.

Fairchild received its first stratotanker in 1958. The Air Force received the last KC-135 in 1965 during the Cold War and hasn’t purchased one since. Instead, various upgrades have been given throughout the years. The latest engine update, the “R” model, has 22,000 pounds per engine, can offload 50% more fuel than the initial “A” model and costs 25% less. That cost is approximately $7,500 an hour, Herr said.

“If you found a way to make your car run off jet fuel and hook it up to our aircraft, we could fill a 15-gallon car tank in all of one second,” Herr said.

Most missions have three crew members: a pilot, co-pilot and boom operator.

“Depending on where we’re going, we might throw in an additional pilot and an additional boom operator that allows us to augment the crew, which extends our duty day,” Herr said. “So if we’re accomplishing a very long mission, we’ll do that. We also carry two crew chiefs with us for those longer missions.”

The KC-135 stratotanker is substantially sized; it’s comparable to the size of a commercial airline. However, Fairchild has the space for them and its four refueling squadrons.

Captain Jeff Keating of the 97th Air Refueling Squadron (the newest squadron on base) has been an Air Force pilot since 2012. He’s been on one deployment since arriving at Fairchild after seven deployments from Wichita, Kansas. He said mission planning occurs the day prior, then after a weather and air space check they coordinate with receivers.

“It’s about two hours normally to go through all our checks (before taking off),” Keating said.

While COVID-19 has thrown many mission and training plans in flux, Keating said he normally flies the stratotankers 1-2 times a week. For now, the KC-135 models call Fairchild home, but are ready to be used whenever duty calls.