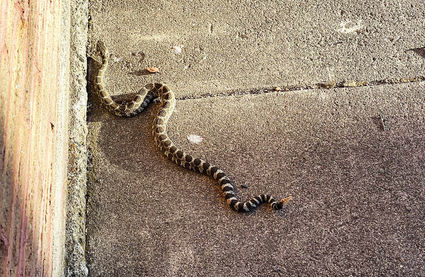 At least three different rattlesnakes visited downtown Odessa last week. Why so many at about the same time is a mystery. It is fairly rare that the slithering critters are seen on Odessa's streets. One snake was first seen under the bench on the sidewalk outside of the Odessa Record's office. It eventually moved down the street to the west and was dispatched by Nate Lathrop when it arrived at Rolling Thunder Pizza.

Another rattler showed up in the rear parking lot of the former VFW building that now houses Odessa Designs and LocalTel Communications. Building owner Jeff Huiras snapped a pho...