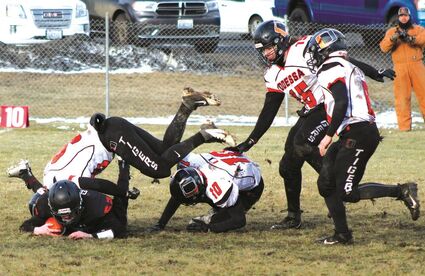 The Odessa defense was all over the ball carrier, including Keith Strebeck (10) and Colton Messer (15).

Pilot Weishaar was the workhorse of this game, rushing for 239 yards on 16 carries and getting across the goal line four times for touchdowns, plus carrying the ball for another four two-point conversions. He also received a 10-yard pass for a TD and scored a total of 38 points.

Anthony Elder rushed for 18 yards on two carries, one a TD. Gage Starkel caught a 10-yard pass for a TD, and Tim D...