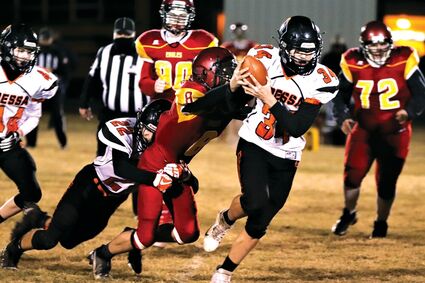 Freshman Zane McMillan (34) strips the ball from the Eagles quarterback Tanner Fleming as he is tackled by Gage Starkel (22).

ST. JOHN – The Odessa Tigers (3-0) juggernaut hit the century mark for the first time this season as they dominated the St. John-Endicott-LaCrosse Eagles (0-2) on the gridiron Wedneday night, March 3.

"We just had a tough game," Eagles Coach Richard Hallenius said on the field after the blowout. "It's obvious why they're the state champs. They have a lot of kids versus our 11."

For the Tigers part, every one of their nearly 30 players took the field for several minutes of the game.

The Tigers began rotating all of their starters off the field at the start of the second quarter to give jun...