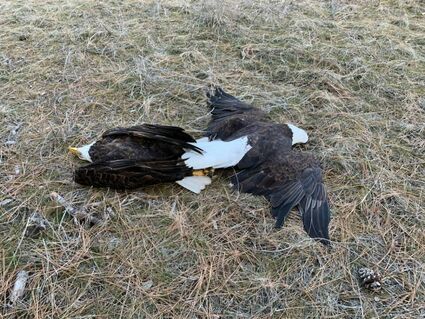 Department of Fish and Wildlife

These eagles died after crashing near Fort Spokane.

DAVENPORT – Two bald eagles were found dead by a citizen on Miles Road near Fort Spokane on March 3. The eagles' talons were still locked together when they were found.

Fish and Wildlife officer Curt Wood said it's currently unknown whether the eagles were two males fighting in the air or a male and female performing breeding and courtship rituals.

"Apparently these two eagles got either too close to the ground or some power lines, and crashed and burned (to quote an old 'Top Gun' saying)," Wood wrote in an email. "They will eventually be shipped to the US Fish and Wildlife Service in O...