By Taylor Newquist
The Colville Statesman-Examiner 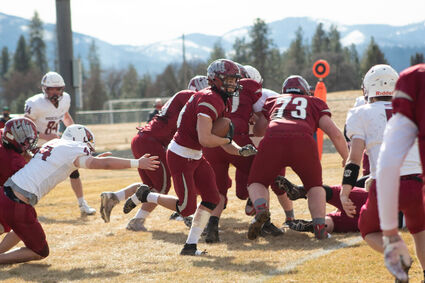 Colville's Dale Martin rushes against Medical Lake in March. Martin suffered a brain injury against Deer Park April 1, which required emergency surgery and sedation until he was removed from life support April 10.

COLVILLE – Black shirts with a bold No. 35 on the back were worn all around Yep Kanum Park Saturday, April 10. At exactly noon, the somber silence of the people gathered there was broken by a united prayer.

Martin, a running back and defensive end on the football team, suffered a brain injury late in the third quarter of an April 1 game. He collapsed on the field and was taken in an ambulance to the hospital, where according to sources close to the situation, he required emergency surgery and was being medically sedated all last week.

Friday night, family friend David Goble made the announcement on Facebook that Martin's injuries were too severe to survive. Family and friends held a hero walk for Martin. He was taken to the operating room to donate his organs in what Colville head coach Greg Mace called "One final selfless act."

On Saturday, the cold, grey and gloomy skies that hung above Colville matched the emotion of the community. Tears were shed awaiting the result at the hospital, and the gathering at Yep Kanum Park continued to grow over the coming hours. People shared memories of Martin, grieved and made donations to the family.

Martin was remembered as determined, funny, and an all-around joy to be around by his classmates and teammates.

His passing shook not only the Colville community, but thousands across the state. Football teams, parents and media members reached out to send their condolences with one word as the common thread-heartbreaking.

Colville is not alone in experiencing this tragedy. A 2013 study by the American Sports Journal found that just above 12 high school and college football players pass away each year, with 243 football related fatalities between 1990-2010. Brain injury was the second-leading cause at 25.5%, behind cardiac failure as the most prominent cause of death.

Martin's impact and legacy will live on in the program and community forever. A banner with his picture was signed by people in the park and will be hung in Colville High School.