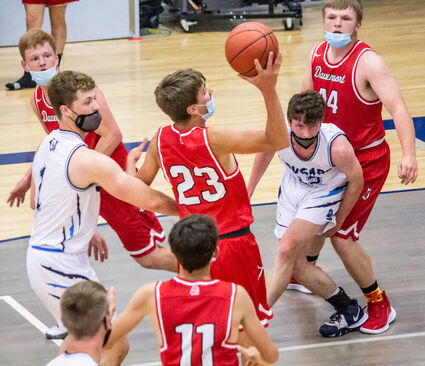 Davenport junior Jarrett Jacobsen corrals the ball away from the Chewelah defense during the Gorillas' 54-48 victory over the Cougars Tuesday.

CHEWELAH-The Davenport boys varsity basketball team kept rolling to its fourth straight win to start the 2021 season against the Chewelah Cougars (1-3) 54-48 Tuesday, May 25.

The Gorillas were led by the players who have carried much of the scoring load all season: Tennesee Rainwater and Brenick Soliday.

Rainwater scored 20 points on 8-for-20 shooting while converting seven of his 10 two-point attempts and snaring seven rebounds, dishing out four assists and blocking two shots. Soliday scored 18 points and knocked down four three-pointers while grabbing six rebounds and getting two steals....