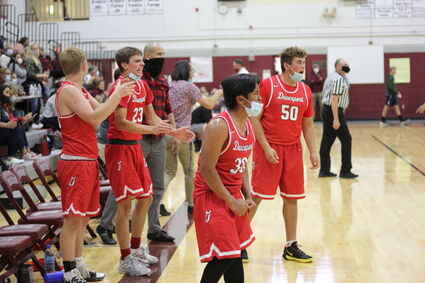 The Davenport bench celebrates a Reardan offensive foul during the Gorillas' victory in the annual rivalry match.

REARDAN-It was a rivalry game, after all. That just didn't show until the second half, after Davenport jumped out to a 35-11 halftime lead and held on for a 67-38 final victory over the rival Reardan Indians.

"It was our defense. We were able to get out and be a little more aggressive and limit them to one shot," Davenport head coach Matt Henry said. "We knew what was going to come (in the second) half and were able to stem that tide a little bit."

The game got physical and somewhat tense in the second half. Tennesee Rainwater,...