Boys then get routed at St. George's 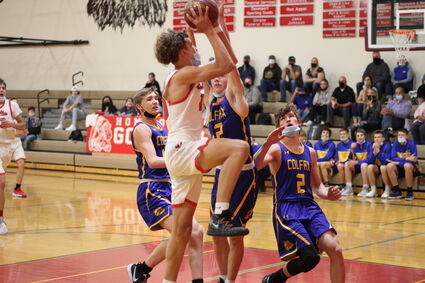 Davenport sophomore Tennesee Rainwater glides to the hoop during the Gorillas' 64-51 loss to Colfax May 27.

DAVENPORT –The Gorillas ran into their toughest test against the now-healthy Colfax Bulldogs, and succumbed to the challenge. Colfax handed Davenport its first loss of the season 64-51.

Key contributors John Lustig and Damian Demler returned for Colfax and led the way with 22 and 16 points apiece.

Colfax took an early lead and led 14-9 after one quarter. They extended the lead to 17-9 on a Lustig three-pointer, but Davenport responded with a 9-0 run to take the lead 18-17. Colfax called a timeout and responded with a 10-0 run of its own. Davenport never held the lead again and struggled...