Odessa over Harrington in first outing 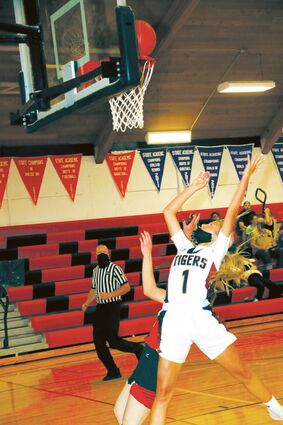 Ashlyn Neilsen (1) is well on her way to scoring 25 points against Harrington in the June 1 game played in Odessa.

ODESSA – The Odessa High School girls defeated the Harrington Panthers in a game played in Odessa's home gym June 1. Ashlyn Neilsen was named Player of the Game and scored a game-high 25 points for the Tigers, while also leading the team with nine assists and eight steals. Hayden Schuh scored 15 and led in rebounding with nine. Neilsen and Schuh also were responsible for two blocked shots each on defense.

The Odessa team is young. With only two seniors and one junior on the roster, the freshmen, sophomores and eighth-graders will see lots of playing ti...