Gorillas advance to NE2B semifinals for rematch with Liberty 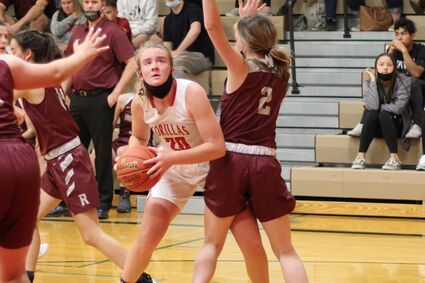 Ellie Telford knifes to the rim.

DAVENPORT--Ellie Telford nearly matched her career-high with 28 points and the Lady Gorillas fought off the rival Reardan Indians 51-38 in an NE2B District quarterfinal game Tuesday.

Reardan kept the game close through a quarter and a half, but Telford's low post presence proved too much. The Indians were led by Ayden Krupke's 16 points, while Madalyn Dewey added 13 points.

Davenport will take on the Liberty Lancers, whom the Gorillas beat in a nonleague game last week but fell to in the league game in Spangle. The semifinal game is Thursday, June 17 at Liberty.

Look for more on tonig...