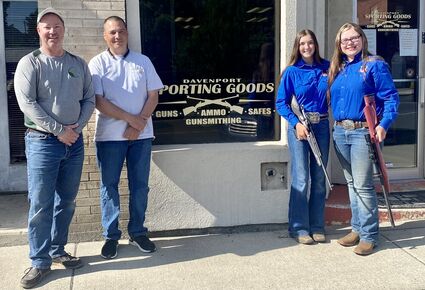 Libby Swiger and Payton Nachtigal of Davenport, right, qualified for nationals in air rifle. Here, they pose with their sponsors, Kevin Hupp and Jonn Chapman of Davenport Sporting Goods.

The two local high schoolers will head to Lincoln, Nebraska for the national competition July 20. The top four finishers in the state event, which also include Mackinsey Dale and Jase Bustad, qualified for nationals.

Finishers were determined by cumulative points between three regular season competitions. Nachtigal, a sophomore, finished third in stat with 611 points, while Swiger, a junior, finished fourth with 571...