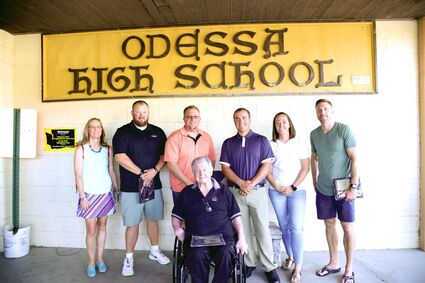 ODESSA – The Odessa Athletics Hall of Fame held its induction ceremony last Saturday in the Odessa High School gymnasium lobby. Nine individuals and two teams were celebrated at the event.

Attending the event in person to accept their awards were athletes Erik Walter (a 2004 OHS graduate), Jennie Harp (2006) and Travis Todd (2008). The award for Chris Scrupps (2003) was accepted by his brother Ryan Scrupps, as Chris is serving in the U.S. Army and was in the process of a transfer from Fort Leavenworth, Kansas to Joint Base Lewis-McCord in Tacoma. The awards for Kysa Cronrath Schaefer (200...