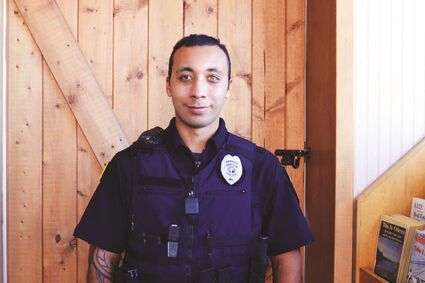 ODESSA – Officer Anthony Diaz is Odessa's newest law enforcement officer. He arrived in town on July 3 and has been accompanying Chief Les Jimerson for the past several days, getting familiar with the community and awaiting the arrival of his uniform. As of last Saturday, he was in that uniform for a photo and brief interview at the office of The Record.

Diaz is a native of Yakima. After finishing high school, he joined the work force there and served in various capacities, including as an animal control officer and a certified reserve officer for the nearby city of Moxee. He also has experience as a volunteer firefighter and EMS provider. Although he has yet to attend the police academy, he is certified to stop vehicles, drive his own patrol car and serve alongside Jimerson. In August, he begins attending the police academy in Spokane.