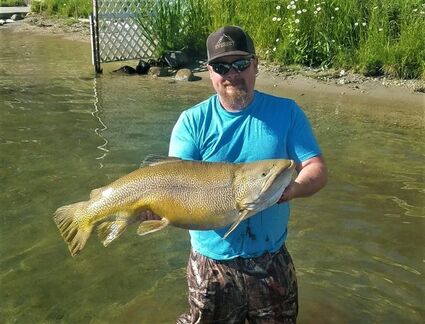 Caylun Peterson poses with a massive tiger trout he plucked from Loon Lake in June. The specimen weighed 24.49 pounds, easily topping the previous state record of 18.49 pounds set in 2015.

The 24.49-pound tiger trout broke the previous record by a full 6 pounds, according to Bruce Baker, an inland fish biologist with the Washington Department of Fish and Wildlife (WDFW).

Angler Caylun Peterson caught the monster tiger trout on June 26, 2021, fishing in the early-morning hours in part to escape the triple-digit heat forecast for the day. Peterson said he's been fishing Loon Lake -- located about 30 miles north of...