Odessa ranked No. 1 by ScorebookLive 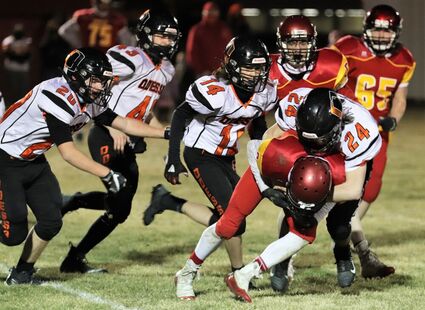 The Odessa Tiger defense overwhelmed the St. John-Endicott Eagles during the spring 2021 season.

ODESSA - It's going to be a banner year for District 7 NE 1B football teams, if preseason rankings by ScorebookLive.com hold up.

In the Class 1B (eight-man) football rankings released last week, three of the teams hail from the NE 1B League.

The Odessa Tigers earned the No. 1 ranking, followed by Almira-Coulee/Hartline Warriors in the No. 2 spot.

ScorebookLive also ranked the Wilbur-Creston Wildcats in the No. 9 spot.

The top-ranked Tigers were undefeated in the abbreviated spring 2021 season and have won two back-to-back state championships.