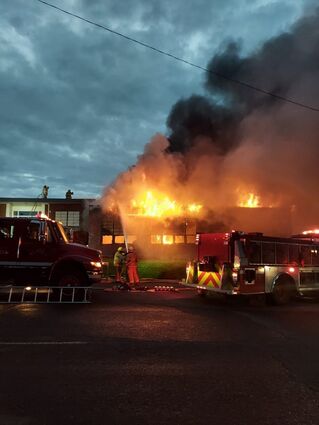 Crews work to control the flames engulfing the Almira School fire. The building was a total loss after Tuesday's burn.

ALMIRA—Flames engulfed the elementary/middle school here in a fire that began Tuesday afternoon, Oct. 12 and burned into the early morning Wednesday, Oct. 13. The school building was ruled a total loss, and the local community has lost its school.

A cause of the fire hasn’t been made official, but authorities believe it may have been caused by an electrical issue, according to Lincoln County Sheriff Wade Magers.

The call of a fire came at 4:12 p.m. Tuesday after someone inside the building smelled burning. The fire began in the northwest corner of the building near the electrical room...