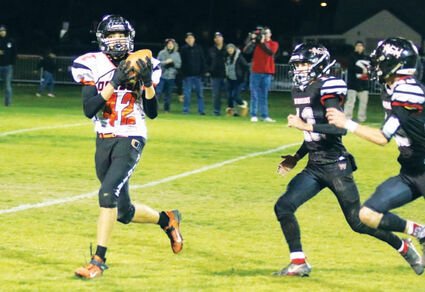 At Friday's football game against ACH in Coulee City, Odessa sophomore receiver Dakota Steward pulls in a pass from the quarterback for a 33-yard gain.

ODESSA – The Odessa Tiger football team lost its first game since the beginning of the 2018 season to the Almira-Coulee-Hartline team this past Friday night. The game saw another Tiger injury, as Gage Starkel was tackling a Warrior runner and took a knee to the kidney in the tumble that followed. Reports from the family say he is doing well and does not require surgery, but he will be out of action for at least four weeks while his wound heals. Meanwhile, Jacob Scrupps is also still out of action due to a concussion.