Congresswoman talks the issues with sparse crowd ahead of demonstration 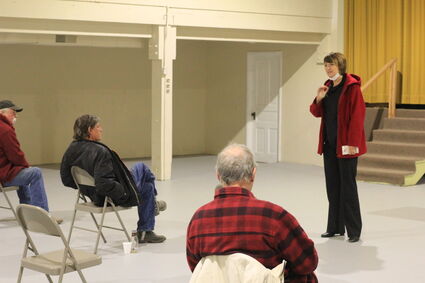 DAVENPORT-5th Congressional District Rep. Cathy McMorris Rodgers was here Friday morning, Oct. 15 for a broadband demonstration by several companies (see page 2). Rodgers met with a sparse crowd of voters at the Lincoln County Fairgrounds prior to the demonstration and had a brief conversation with The Times after the demonstration.

Rodgers, a Republican, spoke to around 10 gathered inside for about 30 minutes. She first read a passage from the U.S. Constitution before sharing her concerns about talk in Washington D.C. regarding raising the debt ceiling, inflation and the government's proposed budget.

"Inflation is a hidden tax on individuals," Rodgers told the crowd. "It's a hidden tax, but it is real, and it is a cost."

The Times spoke to Rodgers about broadband connection in small towns, the recent Almira School burning and her bout with COVID-19.

Rodgers, who is fully vaccinated, experienced mild symptoms and told the public about her coronavirus diagnosis Oct. 8. When asked when she was cleared by doctors to exit quarantine and meet with voters again, she said she had been cleared earlier the week of Oct. 15.

The Times asked Rodgers, an advocate for rural broadband connection, whether fiber connection is a viable long-term Internet solution in small cities.

"I think we need to focus on getting those cities whatever the latest technology is that will work," she responded. "That's actually something I've been talking to (Vice President) Kamala Harris about recently."

Rodgers also said most of the funding to help re-build the Almira School would have to come at the state and local level due to strict federal rules outlining what a federal "disaster" for funding would be.