Teams will have fourth matchup in league playoffs 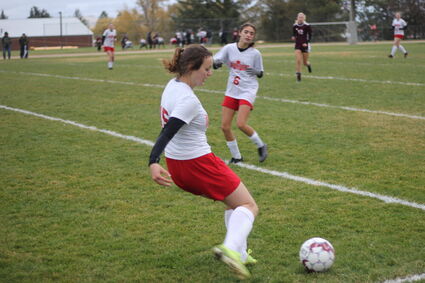 Davenport freshman Kiera Katz lets a shot fly in the first half against Reardan. Katz scored a long goal in the Gorillas' 4-0 win to clinch the regular season league title Tuesday, Oct. 26.

REARDAN-Even though Reardan has only been in the NE2B for two seasons, a rivalry is beginning to bud between the youthful Davenport Gorillas and Tuesday's home team. Going into the match, each team had won on the other's home turf. In the rubber match, that trend continued, with Davenport earning a 4-0 win Oct. 26.

Davenport clinched the NE2B regular season title and No. 1 seed in the league playoffs with the victory amidst cold, windy and rainy conditions.

The game was scoreless for 20 minutes despite a couple scoring opportunities from each team. Then, Davenport struck with a high-archin...