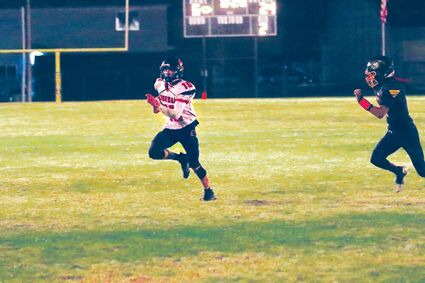 Quarterback Collin Martin is hard to catch once he breaks into the clear. He had a very productive game at Cusick last Thursday evening.

ODESSA – Due to an inability to find officials for the game scheduled between Odessa and Cusick for Friday, Oct.29, the game was instead moved to Thursday, Oct. 28.

Quarterback Collin Martin rushed for 98 yards, passed for 82 yards and added another 25 yards in punt/kickoff returns for a total of 180 yards to lead the team. He also scored three touchdowns and a two-point conversion to also lead the team in points with 20. Davey McMillan had 114 yards rushing for two touchdowns and three 2-point conversions for a total of 18 points. Daeton De...