By Marge Womach
Special to The Record 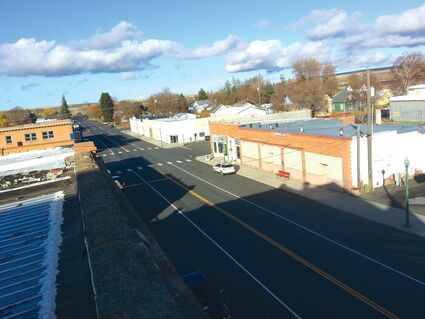 A late afternoon view of Harrington's business district from the roof of the opera house, where repairs were being made to an ill-fitting item called a "top hat."

Casey Monge will no longer be needed for her license as operator to cover the wastewater treatment plant, since Devin in the Public Works Department now has his license.

Councilmember Peter Davenport asked about attorney fees and whether they were all used for consultation for creation of the new City Handbook. Mayor Nathan Luck said the fees were for the handbook, but he didn't remember the exact number of hours charged. It was said that $870 was paid for three hours.

Luck opened the public hearing on revenue sources for the 2022 budget and asked the audience if there were questions or concerns. Then he asked in jest, "Can the city legally buy lottery tickets?" Davenport asked Luck whether he would have a preliminary budget before the next meeting. Luck responded that he could offer him a draft upon request.

A long discussion of COVID-19 Relief Funds took place where Luck said the rules governing potential use of those funds is vague.

The general assumption from Luck was that the water meters could be eligible for that funding, but he had concerns about whether tools and equipment would be allowable. Davenport asked for specific limitations on spending the funds. Luck reiterated that he cannot give a clear answer to that, except to say that tools and equipment are more worrisome than meters.

Luck introduced the topic of the City Handbook, which has been in the process of being revised or rewritten since last November. The committee working on it consists of David Buddrius, Stephen Hardy and Luck.

Luck said several grants have been received to help defray the expense. Hardy spoke at length about the process and the shortcomings of the present version, saying he anticipates working on it again next year. For the present, however, he wanted to have this version approved with minor changes. The council voted to approve the handbook.

Mark Stedman discussed the Starting Place apartments, formerly known as the Landmark Apartments. Stedman said that the establishment sat empty for two years. The Harrington Community Church spent $75,000 in renovations after assuming ownership. They are currently paying the city for one meter-hook-up, and the city intends to adjust the fee. It is low-income housing, primarily for veterans.

The clerk and mayor acknowledged that the meter readings were not altogether accurate, with the mayor saying, "We are trying to figure out what the city should be charging and how many ERUs (equivalent residential units) are being used."

Discussion included vague comparisons of the rate for the school, the Bly Apartments, the hotel and the golf course, and wanting to use some formula to properly charge the Starting Place apartments. No action was taken.