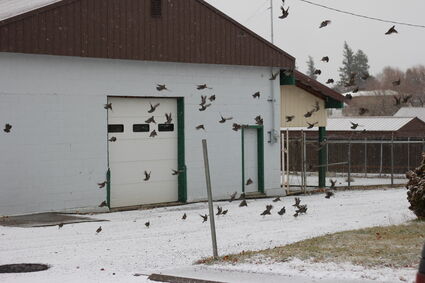 The first sustained snowfall of the season began to fall in Davenport Thursday, Nov. 18. These quail were gathering in bunches on 12th Street, but scattered when they were offered to have their photo taken.

DAVENPORT-The first sustained and sticking snowfall of the fall/winter season arrived in Lincoln County Thursday, Nov. 18 into Friday, Nov. 19, marking the first winter weather commute for local drivers. 1.7 inches of snow were recorded in the Davenport area by the National Weather Service after no snow was measured previously in November. 0.2 more inches fell in the morning hours of Tuesday, Nov. 23 to bring the week's total to 1.9 inches.

The high temperature recorded this month was 56 degrees on Monday, Nov. 15, but two days later,...