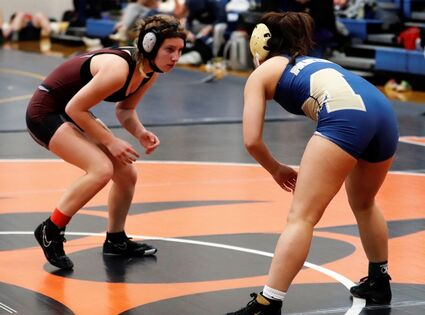 Reardan's Vaea LaMoureaux circles while looking for an opening to shoot on Kelsey Louen of Mead in the girls 120-pound championship. Louen won by decision, 7-2.

Vaea LaMoureaux took silver in the girls 120-pound class as teammates Preston Neufeld at 106 and J.C. Merriott at 113 both took second in the boys division.

LaMoureaux opened the tournament by pinning Sydney Sisk of Colfax in 2:17 and then Alyxandra Daniel of Rogers (Spokane) in 34 seconds.

In the finals, she lost by a 7-2 decision to Kelsey Louen of Mead.

At 106, Neufeld reached the finals by pinning four competitors – Riley Davis of Freeman in 34 seconds, Etha...