Tiger boys lose one, win one 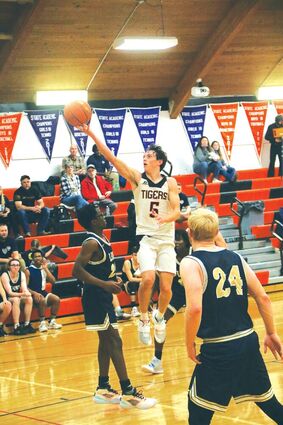 Collin Martin rejoins the basketball team after healing from an injury during the football season.

ODESSA – Another week has passed of Covid messing with the basketball schedule. A non-league game against Moses Lake Christian Academy was scheduled for Jan. 11, then postponed until Wednesday, Jan. 12, when the game was played in Odessa. Collin Martin returned to the lineup, having been released to play by his doctor. The team was thus finally back at full strength.

The game was definitely a hard-fought battle. Although MLCA dominated early, the Tigers fought their way back into the game. The only injury, however, was to the unlucky referee who was knocked into the bleachers by a dribble...