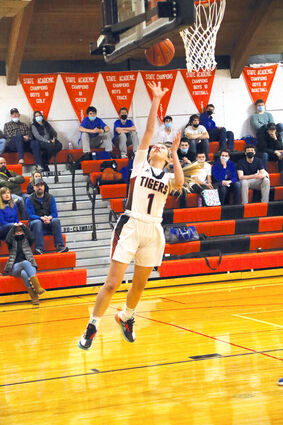 Ashlyn Neilsen makes an uncontested layup after one of several steals that sent her racing to the Tiger basket. She was on fire and scored 33 points on Jan. 22 against the Wildcats.

WILBUR – Wednesday, Jan. 19, the Tiger girls traveled to Wilbur to face Wilbur-Creston-Keller Wildcats, losing by a score of 25-44.

Schuh also led the team in rebounds with nine.

After bouts of illness last week, the girls looked like they were not back in form. This game was a makeup game that was originally scheduled for the previous week. The Tigers were set to face WCK again Saturday, Jan. 22, but first faced Almira-Coulee-Hartline at home in Odessa o...