Tiger boys are 4-4 in league play 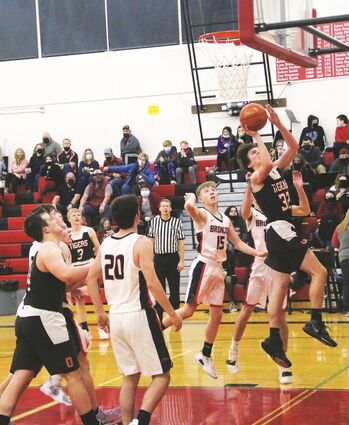 Odessa freshman Corbyn Neilsen was the high scorer in the Tigers' loss to the Broncos on Jan. 25. Readers may also recognize the Broncos' Blake Earle (#15), son of Dorcey Hunt of Odessa/Ritzville.

RITZVILLE – A league win over Mary Walker and a league loss to Cusick, plus a loss to the larger Bronco co-op of LRSW was the story for the Tiger boys last week. Most games were able to be played in the local 1B league despite Covid still doing its best to sideline players from many different teams.

The Tiger boys fell to the 2B league's Lind-Ritzville/Sprague/Washtucna team, 38-76. Jacob Scrupps scored 14 points to lead the Odessa team.

Scrupps also led the rebounding with eight. Additional stats were not posted.