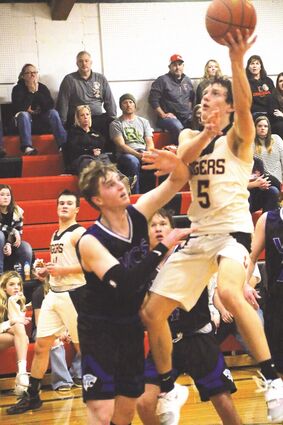 Collin Martin (#5) soars over defenders from Valley Christian in the home game played Feb. 1. The Tigers led the whole way, but VC came roaring back with a late fourth-quarter surge that put the Panthers just two points shy of tying the game.

Against Valley Christian on Feb. 1, Odessa held on to the win as the Panthers put forth a last quarter surge that nearly upset the Tigers, who had led throughout the game. As it turned out, the Panthers fell short by only two points. Collin Martin was back in the lineup and led the Tiger offense with 15 points. Jacob Scrupps had 14 and Nathan Carstensen 13 for a balanced attack assisted by several other players.

In rebounding, Carstensen was the team leader with nine.

On Feb. 2, the Odessa boys traveled to Wellpinit. Scoring in double figures were Daeton Deife with 19 points, Martin with 17, Carstensen with 13 and Scrupps with 10.

Scrupps and Carstensen led the rebounding with six each.

On Thursday, Feb. 3, the boys faced Almira-Coulee-Hartline in a makeup game. Playing their third game in as many days, the Odessa players looked like they needed a rest break. ACH's 6'3" senior Reece Isaak dominated under the basket, leaving Odessa little room to grab rebounds or score inside the key. Deife led the Odessa scoring with only eight points.

Gage Starkel's three rebounds were the most for any Tiger.

Saturday's varsity game against Oakesdale was basically a repeat of the ACH game, absent the dominating center. Shots taken by the Tigers simply refused to fall through the net. One again the high scorer for Odessa, Carstensen, had only eight points.

Starkel again led the rebounding, pulling down eight. Turnovers were rampant against both ACH and Oakesdale.

The Tiger boys finish the regular season with a record of 6-12 overall and 5-6 in league play.