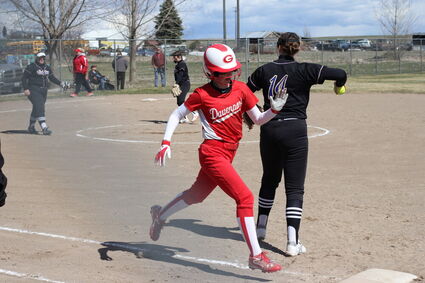 Davenport senior Allison Jorden tries to stretch out a grounder for a single against Colfax Saturday, April 2. The Gorillas fell in both games of a doubleheader with the Bulldogs.

DAVENPORT-A visit from the Colfax Bulldogs for the Gorillas and a trip to Kettle Falls for Reardan spelled losses for all local baseball and softball teams last Saturday, April 2, except for Reardan baseball splitting two games with their opponents.

Colfax handled the Gorilla baseball and softball squads in both games of a doubleheader, which was the home opener for Davenport baseball and the season opener for softball.

Odessa baseball didn't play a game in the last week.

Reardan baseball was scheduled to play Medical Lake in a non...