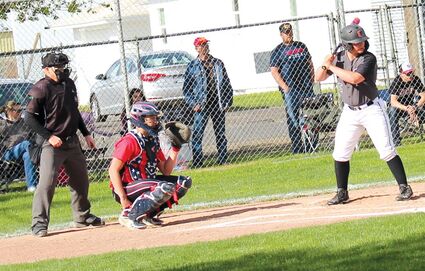 Tucker Walter is up to bat at the Odessa vs. Northport loser-out game.

ODESSA – The Tigers defeated the Northport Mustangs 7-6 Monday, May 9, at home in Odessa to make it into the next round of playoffs on Wednesday. After a 1-1 first inning, the Tigers added run in the second, fourth and sixth, while the Mustangs had a five-run sixth inning to tie things up. The game-winning run came in the seventh, when freshman Corbyn Neilsen was hit by a pitch to get on first base. After stealing second, then advancing to third on an error by the catcher, Neilsen then scored the winning run on a wild pitcher to batter Tucker Walter.

Another stellar play came in the secon...