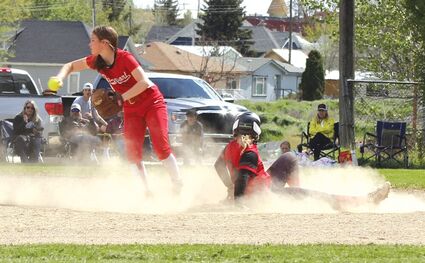 Davenport's Samantha Odenrider fields the ball during a 13-10 pigtail game victory over Lind-Ritzville/Sprague Monday, May 16. The Gorillas advanced past the Broncos but fell to Colfax and Chewelah to conclude their season Tuesday.

SPANGLE – The Reardan softball team suffered a loss in its first District 7 NE2B game but staved off elimination with a victory in a loser-out game.

Davenport, meanwhile, played into the tournament but was eliminated on the first day.

Reardan entered the tournament as the seventh seed and fell to the Liberty Lancers in Spangle 11-4 in their first postseason game Tuesday, May 17.

The Screaming Eagles stayed alive in a loser-out game, however, fighting off the Kettle Falls Bulldogs 13-8 later that day.

Reardan will continue its postseason efforts against the Chewelah Cougars in a game th...