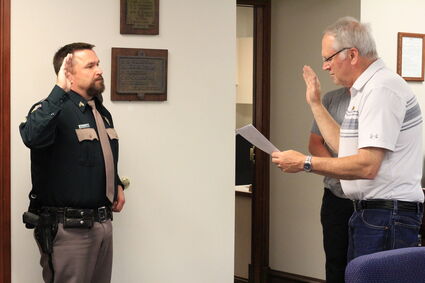 Davenport native Gabe Gants is sworn in as the 26th Lincoln County Sheriff by commissioner Scott Hutsell in a midnight ceremony Friday, July 1.

DAVENPORT-In a midnight move that did, indeed, occur at midnight, Gabe Gants was sworn in by the Lincoln County Commissioners as the 26th Lincoln County Sheriff Friday, July 1 before a deputy-dominated crowd in the commissioner chambers at the County Courthouse.

Gants was appointed by the commissioners to conclude the retired Wade Magers' fourth elected term through this year. He was one of three finalists, along with Jeff Barden and Andy Manke, chosen by the Lincoln County Republican Central Committee that were submitted to the commissioners for consideration to be Sheriff for the rest of...