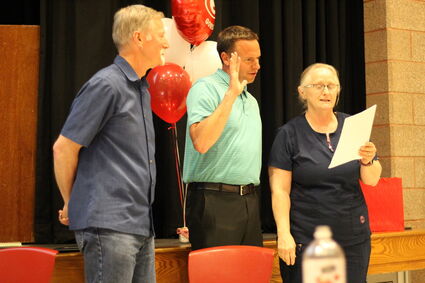 Flanked to the right by former superintendent Jim Kowalkowski and to the left by school board chair Deanna Fitzpatrick, new Davenport superintendent Chad Prewitt takes his oath of office.

DAVENPORT-There's a new superintendent to be Chad after last Wednesday's school board meeting. On the same night former district boss Jim Kowalkowski was recognized heading into his retirement, Chad Prewitt was sworn into the position by board chair Deanna Fitzpatrick to conclude the June 29 regular meeting.

Prewitt took the oath of office with Kowalkowski by his side as Fitzpatrick read him the rather complicated pledge to recite. He officially became superintendent Thursday, June 30.