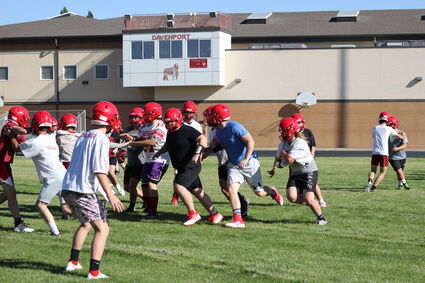 Davenport senior Sam Schneider takes a handoff from quarterback Evan Gunning through the left side during practice Wednesday, Aug. 17.

DAVENPORT-Freshly mowed, albeit slightly bumpy, grass. Getting run formations down pat. 20% of the roster absent because of wheat harvest. It's all a staple of the beginning of football season in Lincoln County as teams held their first practice in the morning heat Wednesday, Aug. 17.

Davenport is looking to build off a state playoff appearance in 2021. First practices don't often indicate much, but senior Sam Schneider, traditionally a fullback, took the majority of reps as the starting running back behind returning senior quarterback Evan Gunning. The team is trying to replace the produc...