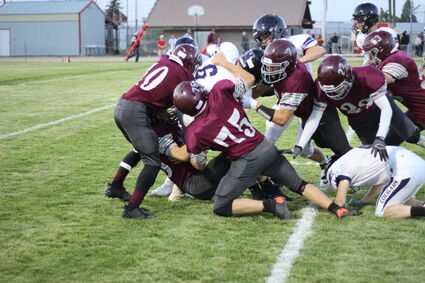 A host of Reardan defenders gang tackle Chewelah quarterback Clay Jeanneret Friday, Sept. 16. Reardan was shut out by the Cougars 26-0.

REARDAN-The defense was opportunistic, forcing five turnovers, but Reardan's offense was unable to get any traction against the undefeated Chewelah Cougars Friday, Sept. 16. Chewelah came to town and shut out the Screaming Eagles 26-0.

Reardan fell to 1-2 with the loss, while Chewelah improved to 3-0.

The trend of Cougar turnovers started on the game's opening drive, when Chewelah drove down to the Reardan 25-yard line before Aidan Chilson forced a fumble that Tyler Clouse pounced on. Reardan was unable to capitalize on the giveaway, and the Cougars got on the board on the next drive when Zach Bowman took a sweep 22 yards down the left sideline into the endzone.

Reardan forced a second Chewelah turnover at the end of the first quarter when Jakari Singleton was the only player who noticed a Cougar pass was thrown backwards into the turf for a fumble. However, Singleton dropped a would-be touchdown pass on 4th-and-5 on Reardan's follow-up drive.

Chewelah turned the ball over three more times in the third quarter, with Chilson recovering a fumble and Nelson and Dirk Shearer both picking off Cougars quarterback Clay Jeanneret. But Reardan's offense never manufactured points, and Chewelah put the game away in the fourth quarter with touchdown runs by Jeanneret and Katzer.

"Defense kept us in it. We kept forcing some turnovers," Reardan head coach Matt Clouse said. "On offense, we were missing blocks, dropping passes. It was not a good night for us on the offensive side."

Reardan's defense was led by Chilson, who had a whopping 17.5 tackles. Singleton had six tackles, while Rysen Soliday had 5.5 tackles for the home team.

The Screaming Eagles now hit the road for three straight games and will try to right the ship against winless Colfax in a contest that was moved to Thursday, Sept. 22 at 7 p.m.