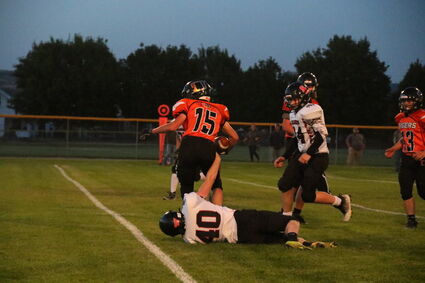 Sophomore Corbyn Neilsen avoids a tackle from a Mary Walker opponent. Neilsen had a total of 31 rushing yards against Mary Walker on Sept. 16.

ODESSA–The Sausage Bowl ended abruptly due to a forfeit by the Mary Walker Chargers of Springdale on Friday, Sept. 16 after Odessa jumped to a 68-0 lead with 4:20 left in the second quarter.

The Tigers quarterback, senior Collin Martin, scored a 84-yard touchdown with a successful two-point conversion to get the scoring going for Odessa.

Junior Chad Strebeck then got a pick six with a successful two-point conversion.

The Tigers recovered a series of onside kicks that should have been picked up by the Chargers, but they never recovered the ball.

The Tigers had one interception and recovere...