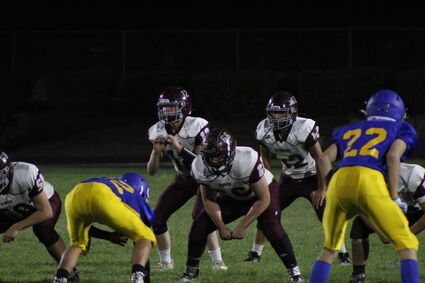 COLFAX – The Bulldogs beat the Reardan Screaming Eagles 20-7 on Friday, Sept. 23 in a closely-contested contest.

After a few back-and-forth drives than ended in punts for both teams, Reardan (1-3, 1-3) struck first with a 50-yard touchdown pass to running back Aidan Chilson on third down. Reardan kicked the extra point to go up 7-0 with five minutes left in the first.

Colfax (1-3, 1-3) proceeded to score 20 unanswered points from that point on – the first six points being a 67-yard run by JD Peterson, a three-yard run by quarterback Seth Lustig (Zachary Cooper converted the two-point attempt on a rush) and the last a 99-yard touchdown run by running back Mason Gilchrist.

"Defense carried us tonight," Colfax coach Mike Morgan said. "I mean (Reardan) is a good offense... They're solid – they got great kids. They play hard and it's always a scrap. No matter what you see on film these guys are going to come in and play hard. And they did... It wasn't perfect. It wasn't pretty at times, but we did what we needed to do to get the job done."

Despite not scoring points, the Reardan offense threw multiple different looks at Colfax: Singleback sets, empty backfields and read options, all in an effort to get the Bulldogs defense on its toes, while also trying to figure out what worked best for the team.

"We're trying to find out identity still," Reardan coach Matt Clouse said. "We know that we can run the ball, If we get behind we're going to start chunking a little bit. We're still trying to find our consistency is what we're working on."

Consistency was what the Screaming Eagles struggled with the most. Reardan ran six screen attempts in the first quarter – only completing one that ended up being called back due to a block in the back penalty.

The lack of consistency showed up in several points in the contest. Despite the two-score win by the Bulldogs, this was still a game that could've gone either way.

Reardan intercepted a pass from Seth Lustig in the second quarter, but couldn't capitalize, turning the ball over on downs before Colfax ran the clock out in the first half, heading into halftime with a 14-7 lead.

The Bulldogs began the second half by taking 7:32 off the clock in the third quarter but didn't score. Reardan responded by marching down the field and taking 6:57 off the clock but missed the field goal attempt to potentially shorten the lead to four points.

The Screaming Eagles broke out a trips formation to end the game, opting to go with only pass plays in a last-ditch effort to score before the end of regulation.

Reardan couldn't finish its final push, completing a pass to Jakari Singleton one yard short of the line-to-gain in the redzone and giving the ball back to Colfax, who ran the clock out to end the game.